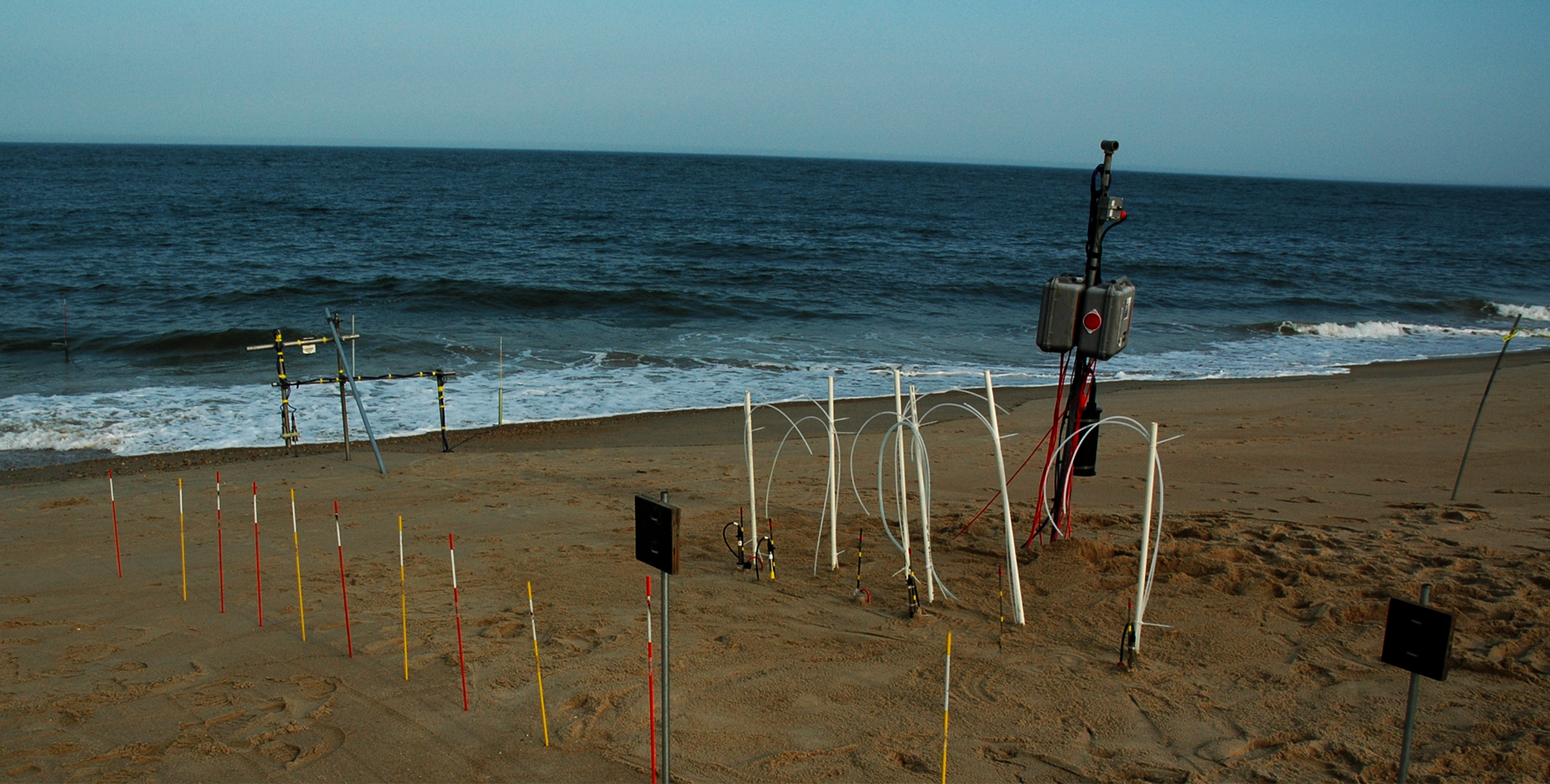 Our research focuses on the hydrologic and geologic controls that drive groundwater flow, mixing, and nutrient cycling in nearshore aquifers. We are interested in the influence of waves, tides, terrestrial recharge, storm surges, sea level rise and other land-sea processes on the exchange of water and chemicals between the ocean and subsurface in estuarine, beach, bay, marsh, and marine environments.

Tides and waves in the presence of terrestrially-driven fresh groundwater discharge in the intertidal zone sets up a cell of circulating seawater in beach aquifers. Seawater infiltrates across the upper beachface and circulates downward and seaward before discharging near the low tide mark, mixing with underlying fresh groundwater along circulating flowpaths. We use a combination of field measurements and variable-density groundwater flow and solute transport models to investigate the rates, magnitudes, residence times, and the spatial and temporal dynamics of mixing between fresh and saline groundwater within beach aquifers. We also focus on identifying the role of longer-term and episodic drivers of change (e.g. sea level rise, storm surge, rainfall events, climate variability) on the quantity and quality of groundwater beneath the coastline.

The paper based on our work on salinity dynamics in beach aquifers was selected for AGU's Water Resources Research Editor's Choice Award, and was featured in EOS's Research Spotlight A New Level of Understanding for Coastal Aquifers, the Environmental Monitor, and the Delaware News Journal.

Groundwater-surface water exchange impacts the availability of nutrients, metals, and other chemicals in marine ecosystems. We study the role of waves, tides, currents, and bedforms on impacting fluid and chemical exchange between groundwater and coastal surface water bodies. Surface water and groundwater flow is tightly coupled, thus downwelling surface water can introduce solutes into the shallow subsurface and undergo chemical transformation before discharging back into the water column, altering water quality. We have characterized the spatial distribution of infiltration, recharge, and discharge zones across a sandy beach at wave to tidal time scales, and are working to quantify wave, tidal, and current-induced benthic exchange in Indian River Bay, Delaware using differential pressure sensors and ADCPs

The hydrology of groundwater systems linked to the biogeochemical framework of coastal groundwater systems. Groundwater flow controls the residence time and thus the exposure time of solutes to microbial communities, and the supply of reactants to biogeochemical reaction zones. To understand the interactions between land-ocean driving forces, groundwater flow, and biogeochemistry, we linked a variable-density groundwater flow and solute transport model to a reactive transport model to simulate DOC degradation, aerobic respiration, denitrification, and sulfate reduction in a beach aquifer under the influence of tides. The results reveal which types of beaches are capable of transforming the largest quantity of nutrients in groundwater before discharging to the sea. The results also demonstrate the sensitivity of mixing-dependent and mixing-independent reactions to 5 physical and hydrologic factors. We have also conducted combined field, laboratory, and numerical modeling studies to investigate the interplay between hydrology, microbiology, and geochemistry in beach aquifers